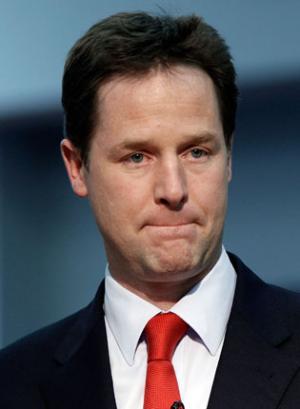 Two weeks ago, when Mark Reckless announced his decision to follow in the footsteps of former colleague Nicholas Carswell and sign up to Farage’s Ukip, the talk of the Tories in Birmingham was of treachery. Carswell, it now transpires, four weeks prior to his defection, had approved of a letter sent to a local newspaper that described a vote for Ukip as a vote for Labour. When asked for his comment in advance of the letter’s publication, Carswell, according to today’s Daily Telegraph, replied to its author Giles Watling: “That reads very well and I would be delighted if you were to send it to the press. Obviously, it is best coming from you – not me. Thanks so much and very well done.”

When it comes to career advancement, disloyalty, it seems, knows no bounds. He may have opted for a separate bedroom, but Liberal leader Nick Clegg has no intention of quitting his four year fling with David Cameron. Even as he washes dirty linen from his relationship with Cameron and his Conservatives, Clegg keeps one eye on the possibility of a new cohabitation agreement next year. Given the depth of discontent with their living arrangements, why does Clegg continue the affair? Because, apparently, if not restrained by him and his virtuous army of Liberals, David and his heartless cohort of nasties would have caused untold damage to the good people of Great Britain. Welcome to the treachery of Deputy Prime Minister Nick Clegg, the deputy of every leader’s worst nightmare, disowning any hand in decisions that might be unpopular, whilst starving his significant other of recognition for a single job well done. Perhaps some small mention of togetherness, a passing nod to the positive, might make Clegg a marginally more attractive proposition to future dance partners. It is improbable. Leadership treachery, like revenge porn, is not the best of credentials to take into a new relationship.

Clegg is not alone this week in turning on his leader. In his new autobiography, former England cricketer Kevin Pietersen takes a swipe at his Vice Captain Matt Prior, describing the wicket keeper as ‘a Dairylea triangle thinking he was a Brie’. Pietersen’s metaphor is as ironic as it is puerile given KP’s disproportionately healthy slice of self-regard. The batsman’s character assassination extends to both players and winning coach Andy Flower. Pietersen, we should not forget, has form in the disloyalty department, sending South African players derogatory texts about his then captain, Andrew Strauss, a leader who could teach Pietersen a lesson on loyalty if he had the humility to learn one.

Settling scores from the side lines – or the bookshelves – is nothing new. Manchester United fiery midfield legend Roy Keane is due to settle a few of his own with Sir Alex Ferguson in his autobiography this week. More surprising are the noises off coming from Lords Noon and Levy who have joined the post Conference chorus of disapproval enveloping Labour leader Ed Milliband. A little like Hamlet skipping ‘To be or not to be’ or Macbeth not quite seeing the dagger before him, Ed failed to deliver greatly anticipated soliloquies about the economic deficit and immigration. Conference goers felt short-changed and, for fluffing his lines, Milliband got little forgiveness. Unlike Laurence Olivier or Kenneth Branagh, Ed Milliband had the option of autocue.

At least their Lordships dispensed their dissatisfaction in public. A darker force of disloyalty is brewing in the Labour back benches where malcontents, cloaked in anonymity, court contenders to dethrone their tabloid-embattled leader. If they succeed, the unseated Milliband may not enjoy much sympathy. Those with more reliable memories than their leader will recall Milliband’s streak of treachery when usurping his brother for the leadership.

This does not excuse the cowardice of the Labour MPs, nor does their assertion that Ed was an acceptable candidate at the time but is now a liability to Labour. This is a line of defence being peddled by Liverpool FC’s manager Brendan Rodgers who recently replaced his serial biter of a striker Luis Suarez with Super, if slightly mad, Mario Balotelli. At the time of the deal, when questioned about the wisdom of hiring the errant striker with a reputation for trouble-making, Rodgers called Balotelli’s signing ‘a ‘no-brainer’: “I’ve worked with kids who have been written off most of my life as a coach. Some of the best players have flaws and issues…when I spoke to him [Balotelli], I realised he is a very clever boy. His talent speaks for itself… since he’s been here he’s been absolutely fantastic.” Under my leadership, just watch, bad boy Balotelli will come good, was the desired response Rodgers wished to stimulate in avid students of his leadership. Less than a month later, with his team performing badly in both domestic and European competition, Rodgers hung his new boy out to dry: “I think there were very few who are top-class who were available and Mario Balotelli was a calculated gamble that we had to try and work with…I always said it was about availability and affordability of players. Mario was the one right at the very end who was available for that.”

Parking Balotelli on the substitutes’ bench to send a clear signal of dissatisfaction would have been fair game. Making tough decisions about team selection is the weekly fare of the football manager. Setting standards, too, is a leader’s prerogative. A simple ‘No comment’ when asked why Balotelli was dropped would have been a more effective response than the manager’s backtracking stab in the back. It would also have left intact any trust the striker might have had in his new manager. Public humiliation of the new boy, whatever his previous reputation, was the behaviour of a bully in the school playground, self preservation presiding over player’s welfare. When Mario next scores for Liverpool, expect a big public hug for Balotelli from his manager as retrospective justification for his brief but necessary betrayal.

Leaders tempted to use a dose of disloyalty to their temporary advantage run two risks. In a press conference after their Ryder Cup exit, Phil Mickelson openly and viciously undermined his Team USA captain Tom Watson. His disloyalty merely reminded us that Mickleson himself had been ignominiously dropped and that his team had lost. This week Clegg, KP and Keane also look like lesser versions of themselves. Worse, whilst their stinging, self-serving criticisms of colleagues cut through the tabloid clutter, they diminish our trust and confidence in leaders. Who would now like to share a dressing room with Kevin Pietersen? Who will look forward to living with the Liberals? Who will believe Brendan Rodgers when he next raves about their talent? It may be less eye-catching but authentic demonstrations of togetherness from our leaders beat moments of betrayal from those we expect to be watching our back. Et tu Brendan?

Find other articles by Richard Hytner at huffingtonpost.co.uk/